Day 6: packing bikes for first time, and taking a train half way.﻿

We spent the morning packing our bikes to be ridden for the first time, I knew it would take long, and it took about five hours. We pulled out about an hour later than we had planned. We sent Kenny ahead to go to the bike shop for a few new parts, and repairs. When we got to the arch de triumph I hopped on Kimballs 20 inch bike, and rode around the arches super busy roundabout. I got a lot of crazy looks. It was awesome.

Getting on the train was rough. The first train, we had 20 minutes to catch. Dan went ahead and started prepping everyone else, but the platform was in a different place than we thought, so they had a lot of running around to do and they were about 2 minutes late, and very winded! We had only made it by about three minutes, but we had their tickets so we needed to wait for them. Frantically running to the platform, but we had missed it. A bit of a letdown. We then went back to another train after waiting an hour, but the train before it had been canceled and there was no room. The train conductor gave us quite a fit as we tried to put bikes on. Our row of bikes was very intimidating, and I think that was the problem.
We learned from that and decided that we would get the Stewart’s on, then the Pugmires and Dian, and then my family next. Anyone that didn’t get on the last 9:30 train would ride the hour back to the campsite and try again tomorrow. So we are focused on getting the Stewart’s on the next train. We unloaded all of their panniers, so it didn’t look like they had a lot of gear with their bikes when they went rolling up there, all of the bike panniers were taken off. We got seven bikes on the train, and even had two of them stacked on top of the upright bikes. It was a very tight fit but we got them on the train.

After all if that, we all ended up getting on the next train two hours later. We were very glad to be out of Paris and on the the rest of our journey.

As we arrived the the Le Mans station we spoke with the Stewarts and they decided they’d just sleep in front of the train station and catch the 6am train. I’ve already used up the airport / train station overnight stay allowance with Brittany:)  so she opted that we would ride to the campsite 5 miles away and take a later train that day.

We ate some Kababs right across the train station and got each of the kids a soda, then rolled out at 1:30. We felt fine about the ride, Le Mans was pretty much shut down for the night. It was a ghost town and on the 5 mile drive we only saw about 3 cars. At one point google maps took us down a very small path through the country that was more like a single track trail. A bit creepy at 2am. Kimball was a stud, and did quite well for an 8 year old who’s parents made him ride at 2am to get to the campsite. By 230am we made it to Camping Le pont Roman.

We pulled off into a farmers field earlier on the ride, but just decided to keep riding to the campsite where we wouldn’t have to wake up when the sun rose. The abundance of stinging neddle helped with that decision.

Oh the other detail I left off, was halfway to the campsite we realized that Kenny was carrying three of our sleeping bags. The Pugmire’s offered to have their baby sleep with them, and that only left us with two short. We ended up putting Kimball and Bennett in the same bag, and then Brittany and I shared a sleeping bag draping it over us. Not too bad, as it wasn’t too cold. I included a picture of what things look like when I woke up…

The end – now here’s some tips for riding trains with bikes.

– Have the panniers either taken off the bike ahead of time, or in a way that makes them easy to remove.

– In France, they say they don’t allow baby trailers, so either fold it down or plead ignorance. They’re generally nice and forgiving.

– Be assertive, realize that more bikes can fit in a small space than you think. Don’t ask permission because you’re an inconvenience and it’s easy to say no. ( I hate to admit this, as it’s quite the scarcity mindset, but this has been proven true on many occasions.) 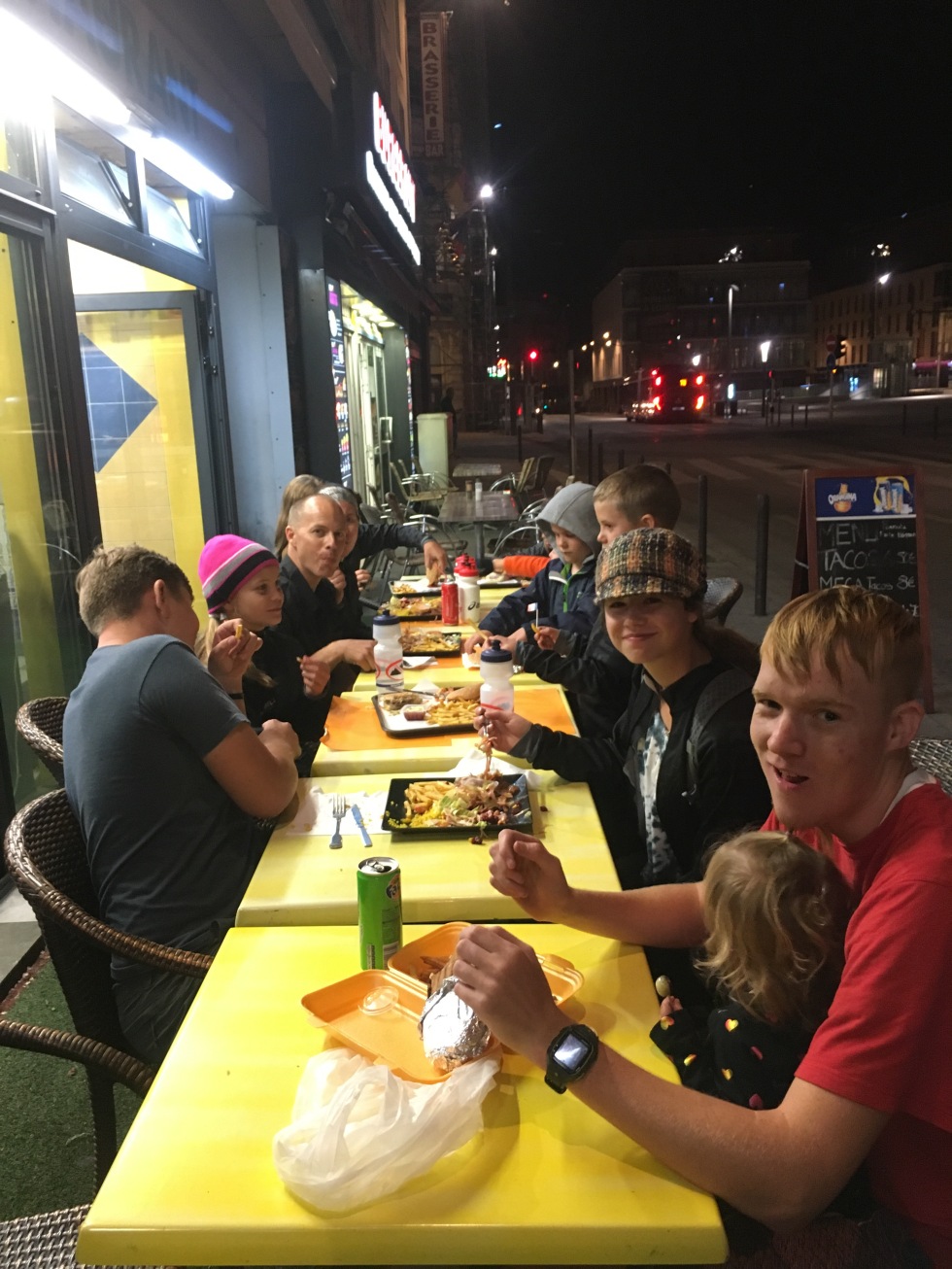 ← Day 5: church and the Louvre﻿ – and how this all came together.
Day 7: Train from Le Mans to Nantes, camping at Belle Rivierre →