We were able to sleep in until about nine, make some scrambled eggs, granola, then swim for a few hours. The Stewart’s made French toast and graciously shared it with us. It’s definitely nice to sleep in and get some rest.

Right as we were getting up Ada told me her tooth was loose enough to come come out. I told her I could use my leatherman to pull it, and surprisingly she let me. Ada has officially lost her first tooth!

We spent a few hours at the pool today, then headed back to camp and did some bike maintenance, and the kids did another round of the pool later on. If I were to ever recommend another family spend two or three weeks here in France, I would have them fly into Paris, then take a train to the Loire river and end in Orleans, which is about 30 miles from where we are right now. This would be an amazing campsite to stop and have a few days to wind down a bike trip. It’s amazing.

There’s a German couple camping next to us. The man, who’s name is the German equivalent of Jared, was very eager to talk. Between his English and French vocabulary we communicated a bit. He’s 81 years old, and he and his wife went on a bike ride today. He says he can still go on 20 mile bike rides no problem. He was telling me that he can still remember being bombed as a child in Stuttgart. He was born in 1936.

Here’s a picture of him using a little remote control to back his trailer in:

The Stewart’s, Pugmire’s, and Brittany and I all went to a nice dinner at the campsite restaurant. Probably one of the best meals I’ve had, very good food quality, though a little pricey at €29 per plate. That came with the starter, and a dessert. Many of you probably won’t believe this, but maybe you gotta see it to believe it.

Verizon is my phone carrier, so with one of their international calling plans I pay $10 to use my phone as if I were in the states. I’ve only done this about five days so far. Otherwise we use Wi-Fi at the campsites. Some of the campsites have free Wi-Fi in limited locations, and other ones have Wi-Fi campsite wide but charge something like three euros per day. One of the campsites charged eight euros.

Slow Internet is problematic when we are trying to download audible books. A long book might be 500 MB, and some Wi-Fi networks are very slow where that could take several hours. Good wifi (internet speed) makes a difference!

With more preparation I’m sure I could find a good Sim card to use here, but I chose not to. I’ve really enjoyed being mostly disconnected. T-mobile also offers free 3G data and texting so that is an option as well. A little money can solve these problems if you HAVE TO stay connected. When I toured for 2.5 months in 2006 e didn’t have much in the way of cell phones and we just used paper maps. We’re using google maps on this trip more than I ever have in the past. 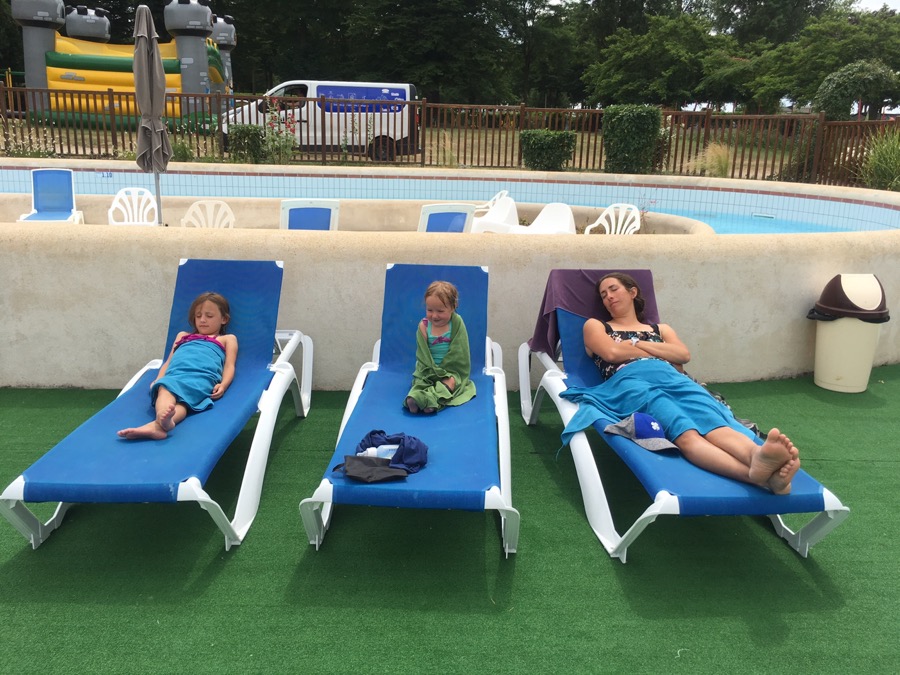 ← Day 20: Blois to the Chambord Castle to Swimming pool paradise (Muides-sur-Loire)
Day 22: Another rest day and an explanation of how we carry it all ﻿ →